The MotoGP VIP Village™ is the exclusive and official hospitality programme of the MotoGP™ World Championship. Organised and run by Dorna, MotoGP VIP Village™ packages offer race viewing from prime locations at each Grand Prix, as well as exclusive entertainment programmes and a friendly and professional catering service. The packages are tailored to cater to the most individual requirements of clients; offering equally excellent experiences for small or large groups or individual MotoGP™ fans.

The British MotoGP VIP Village™ will be located in a large, fully-equipped marquee, located in the infield facing the COPSE turn with close views to one of the most exciting parts of the circuit. 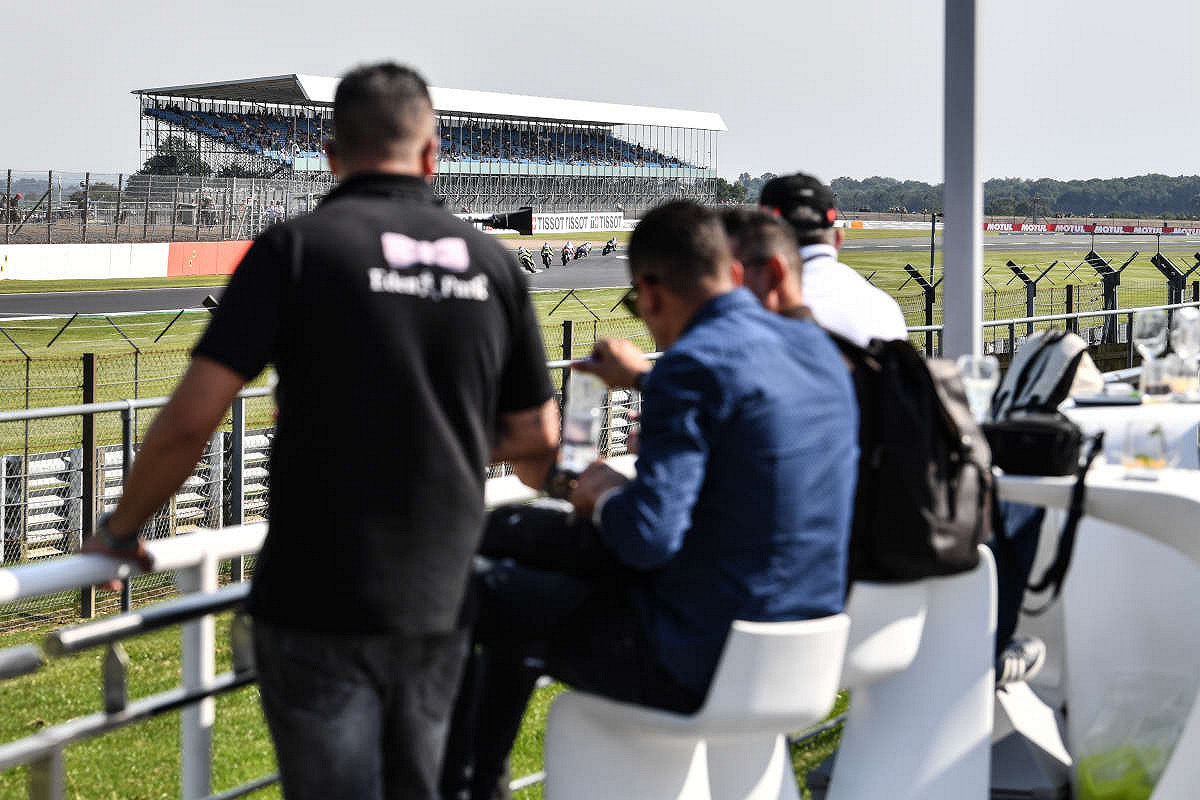 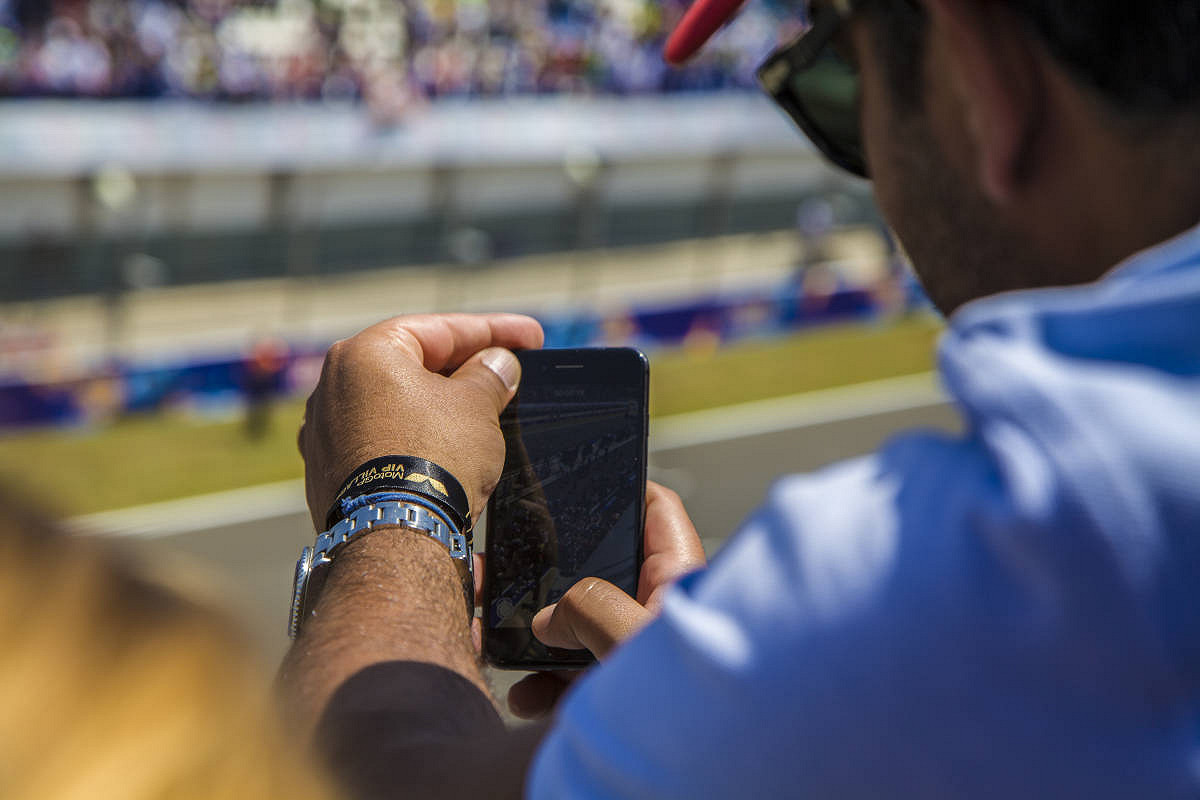 MotoGP VIP Village™ reserves the right to modify the benefits and services offered.

A private corporate area can be arranged for groups of more than 48 people and this area can be customised to suit corporate requirements.

Prices are per person. Children under 2 years are entitled to free entry, please advise us if a child of this age will be attending.

to free entry, please advise us if a child of this age will be attending.

A different way to enjoy MotoGP

Great food, toilets without queues, drinks galore! Great location to watch from and pit walks were lengthy and fruitful. Paddock tour was also great if you spoke to your hostess about who you were hoping to see. Ours got my son on TV! My son also won a helmet in the raffle- thrilled. Could do with more seating outside and better signposting to the parking.

We attended the British Moto GP at Silverston 2017 not knowing what to expect we left in a total high had the best time extremely well organised with everything from tickets arriving Australia in time the parking both arriving and leaving the food seats and general running of the show. The motor racing was amazing.

The only thing I felt could be really improved was the variety of drinks on offer and service provided at the bar. The service felt like it was deliberately slow and the cocktails sounded lovely but weren't pleasant at all. I can appreciate that there is a limit to the amount and variety of drinks that affordability allows you to provide, but it felt like it was being done as cheaply and begrudgingly as possible.

The MotoGP Village experience was excellent, the food and drinks were very good and the service excellent. If I had to be a bit picky, some of the food offering was a little odd (crisps with curry powder?), but this in no way detracted from a great weekend.

Poor car parking and Marquez stand not decorated like others

Took me over 2 hrs to get out of the carpark, no marshalls in sight anywhere. Stand was not decorated like the other fan stands and the flag promised in the &quot;goody&quot; bag was nowhere to be seen!

great weekend- great catering facilities- big problem I booked 6 tickets only got 1 car park pass- couldn't get us all in one car - raised issue at 9am when I got there - was told to go to entrance to sort - which I did on our way out sat - was basically told I hadn't booked anything and I couldn't buy or get a pass off them -so purchased online - had to wair over 2 hours to exit the car park - given what we paid for the tickets that was a disgrace - how can 6 people get in one car ?

Overall it was a great experience, however they could have put the village marque up closer to the track for better viewing. However overall it was well organised, neat and clean

It would have improved our experience if the paddock tours had escorts who knew something about Moto GP and the racers etc. we found that most of our questions could not be answered by our tour guide.

Had to queue from the M1 both lanes of the A43 right to the circuit. Then took 1 hour and 10 mins to do the first 40 yards out of the Club parking area. the whole of the next large car park had emptied BEFORE anyone could get out of Club... hopeless.

The VIP village was excellent. Directions should be given as to which car park to head to as once we arrived at the circuit no-one knew where to send us and it took 40 minutes being sent this way and that until we found someone who knew we needed to head towards gate 19 to get into the circuit. Directions should be sent with the tickets as to where to head towards. We were not the only ones there that had encountered the same problems.

Due to the weather, having no cover/roof on the viewing platform meant a lot of fans got quite wet during the racing. VIP parking, great on Saturday, not allowed in on Sunday, there were plenty of spaces still available. Would have been a good idea to have the earpieces for commentary available, even if we had to purchase them. Great racing, very enjoyable weekend.

General comments were that none of the stewards recognised the parking badge and directions supplied for VIP parking were non existent. The location for viewing was not the best as you only saw the riders after the first corner so had to rely on the screens for the rest of a lap- would have been better to view nearer the last corner/start finish straight. Last year we were given the ear piece radios and these were missed this year. The rest of the experience was excellent.

No race commentary or audio in VIP village

Of all the race weekends so far this season this is the one I know least about. There is the same TV picture I get at home but critically no audio in the VIP village, so, No rider interviews, updates or gossip, I will have to wait until Wednesday and buy Motorcycle news! Also the position of the village did not give a particularly good view. Would I go again? Certainly not to Silverstone!

great service in the vip tent but information was lacking. We did not know where to park, no one said that we had to book a paddock tour. We were not sure what to order or from where but that aside, facilities were first class

didnt get value for money

We had an amazing weekend. The hospitality we received was five star led by a team of highly trained professionals. Moto GP Village tickets are very expensive, but worth every penny.

Discounted child tickets are available in the VIP Village for children aged 2-15 years old. Children under 2 years can access this area for free, but please advise us if a child of this age will be attending.

Back by popular demand in 2021 will be Fan Grandstands u2013 dedicated grandstands where you can join fans from around the world to support your favourite teams or riders and really make some noise!

A limited number of tickets are available in selected Fanstands. These tickets will allow you to be with fans who support the same team/rider. Fanstands will be confirmed within the next few weeks, with grandstands Village B, Copse A and Copse B being dedicated to a team or rider. Please contact us if you wish to be notified.

General Admission tickets are available as single or 3-day tickets and include: